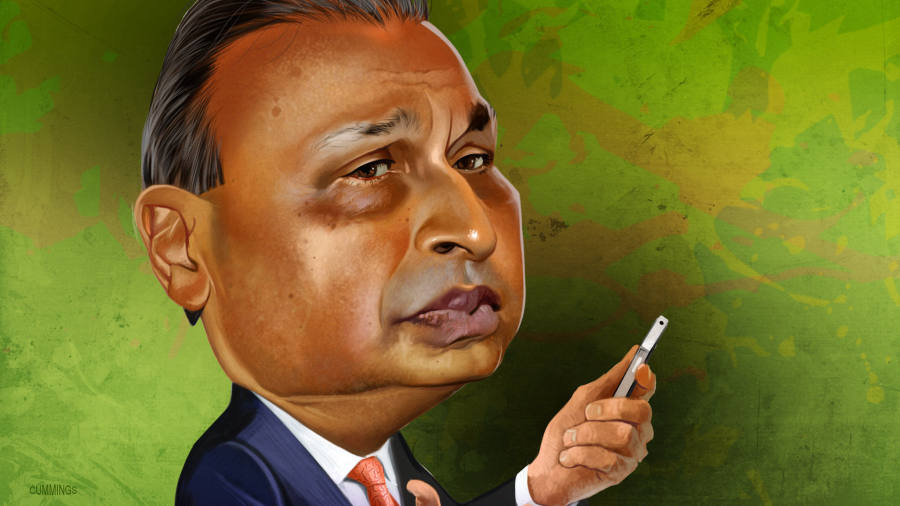 In the ancient city of Udaipur in December, two of India’s most famous tycoons, brothers Anil and Mukesh Ambani, put their rivalry aside to dance at a family wedding.

On a gaudily decorated stage, the entire Ambani clan delivered a choreographed performance to the theme of a Bollywood romantic comedy, cheered on by a crowd that included former US presidential candidate Hillary Clinton and India’s A-list film stars.

Mukesh’s daughter was the bride, but the glitz and bombast were more in line with Anil’s usual style. The younger brother enjoys strong connections in the entertainment world, having married an actress and become a business partner and “dear friend” of director Steven Spielberg.

Yet his position in the top echelons of India’s business leaders has deteriorated. A decade ago, he ranked alongside his elder brother as one of the world’s 10 richest people, with an estimated net worth of $42bn. But his fortune has since plunged with a string of setbacks to his telecom-to-power conglomerate — notably that Mukesh’s huge mobile business Reliance Jio has upended the industry and pushed Anil’s Reliance Communications into crisis.

That crisis has now become critical. This week, India’s Supreme Court found Anil guilty of contempt, lambasting his “cavalier attitude” to RCom’s unpaid dues of $77m to Sweden’s Ericsson. If the payment is not completed within four weeks, he faces three months in prison.

Meanwhile, he is subject to growing political scrutiny of his involvement in an €8bn fighter jet deal signed by India’s government, even as he fends off restive creditors, to whom he has pledged as collateral most of the shareholdings underpinning his control of the heavily leveraged group. Lenders started seizing and selling those shares this month after loan conditions were breached, threatening a broader unravelling.

“He may be able to hold on to some of his assets,” says one prominent Mumbai analyst. “But being a meaningful player, who is taken seriously in the market — that game is finished.”

Anil was born in 1959, as his father was beginning 20th-century India’s most stunning entrepreneurial success story. Dhirubhai Ambani’s four children spent their earliest years in a rundown district of Mumbai, as the former petrol pump attendant set out in business trading synthetic yarn. By the 1980s, Reliance Industries was a giant textile producer, one of India’s five biggest companies.

Anil’s relationship with his father suffered over his wish to marry Tina Munim; Dhirubhai sternly disapproved of her Bollywood background. Anil overcame his parents’ opposition and married the actress in 1991. Mukesh wed a woman chosen by his mother.

Dhirubhai anointed Mukesh as his successor by appointing him as vice chairman and, over the next decade, he handed more responsibility to his sons, with the studious Mukesh taking operational control of major projects such as a new oil refinery, while the more outgoing Anil became Reliance’s external face, dealing with officials, bankers and the media. Senior figures in the Mumbai financial industry say Anil failed to develop his abilities, focusing too much on dealmaking and too little on execution. “His skills were much more on the transactional side,” says one.

Dhirubhai died in 2002 without leaving a will — seemingly assuming his sons would manage to work together. It was not to be. In 2005, after three years of growing tension, their mother brokered a deal that gave Mukesh control of the core oil products business and Anil the telecom, power and financial services units.

The rivalry intensified. In 2008, Anil’s RCom was on the verge of a merger with South Africa’s MTN — a deal that would have capitalised on RCom’s heady market valuation and created a transcontinental telecom giant. Mukesh scuppered the merger, citing a right of first refusal under the 2005 agreement.

Meanwhile, Anil was publicly accusing his brother of using political connections to renege on a gas supply deal to a power plant he had hoped to build. “It is plain and simple corporate greed,” he told investors in 2009, his voice quivering with emotion.

Yet Anil was cultivating political relationships of his own — notably with Narendra Modi, then the charismatic chief minister of Gujarat, whom he hailed as “the lord of men, a leader among leaders, and a king among kings”.

That relationship would inspire the fiercest controversy of Anil’s career. In 2015, France’s Dassault chose his Reliance Defence as its partner for local “offset” production, under the terms of a major fighter jet sale to India. Reliance Defence was incorporated a mere two weeks before Mr Modi, now prime minister, announced the deal in Paris.

The deal has become a political flashpoint in the run-up to this spring’s general election. Opposition leader Rahul Gandhi alleges Mr Modi manipulated the process “to help his friend”. The government, Anil, Dassault and Reliance Defence have all denied wrongdoing. Anil has hit back against coverage of the deal, and of his group’s broader problems. His companies filed 26 defamation lawsuits in 2018 against politicians and media groups, including a $1.1bn claim against the Financial Times.

Behind the display of unity at the wedding, the siblings’ fortunes have diverged dramatically. Buoyed by refining profits and Jio’s huge market impact, Mukesh is now firmly established as the country’s richest man. Anil’s weakened grip on his own group will depend largely on the patience of his lenders.

The writer is the FT’s Mumbai correspondent