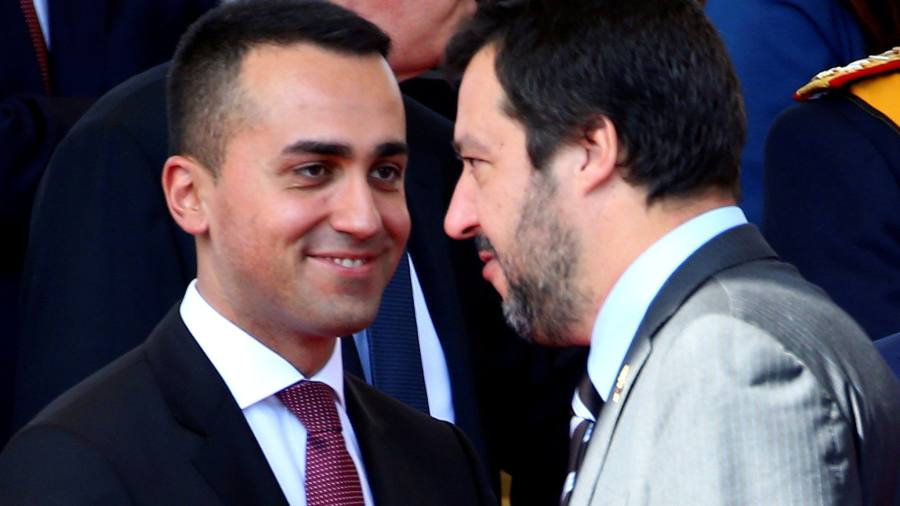 Italy’s coalition government slammed the country’s central bank leadership and stock market regulator, escalating its attacks on establishment figures ahead of the European parliamentary vote in May.

Matteo Salvini, head of the anti-immigrant League party, said the Bank of Italy and Consob, the country’s stock market regulator, should be “reduced to zero, more than changing one or two people, reduced to zero”, and that “fraudsters” who inflicted losses on Italian savers should “end up in prison for a long time”.

Mr Salvini and his coalition partner, Five Star leader Luigi Di Maio, were speaking on Saturday in front of an audience of former stakeholders in Banca Popolare di Vicenza and Veneto Banca, which were liquidated in 2017.

“We cannot think of confirming the same people who were in the directorate of the Bank of Italy if we think of everything that has happened in recent years”, Mr Di Maio said.

The broadside against Italy’s financial establishment comes as the two parties prepare to run against each other in the European parliamentary elections in May, a contest widely seen as a proxy for national polls. Both leaders have also increased their attacks against targets including the EU and French president Emmanuel Macron.

In recent weeks, the League and Five Star have openly squabbled over the future of an Alpine rail line and migration, while the two leaders’ repeated attacks against France have triggered a diplomatic crisis which last week saw Paris recall its ambassador from Rome.

Saturday’s targeting of the Bank of Italy comes after central bankers issued more pessimistic economic growth forecasts for this year compared with the numbers underpinning the government’s budget.

Data last month confirmed that Italy entered into a technical recession in the second half of last year, with the Bank of Italy cutting its prediction of economic growth for 2019 to 0.6 per cent compared with a 1 per cent forecast made by the government.

Mario Draghi, president of the European Central Bank and a former governor of the Bank of Italy, last year warned that central bank independence was under threat by populist governments, while not making a direct reference to Italy.

Mr Di Maio and other Five Star ministers have said they want to block Luigi Federico Signorini, the deputy director-general of the Bank of Italy, from renewing his term, according to a report in La Repubblica. The newspaper reported that the Italian cabinet was divided on the issue.

Earlier this month the government nominated Paolo Savona, who had previously served as minister for European affairs, as the new president of Consob. Mr Savona, a Eurosceptic veteran economist, had last year been blocked as the coalition’s first choice as economy minister by Italian president Sergio Mattarella.