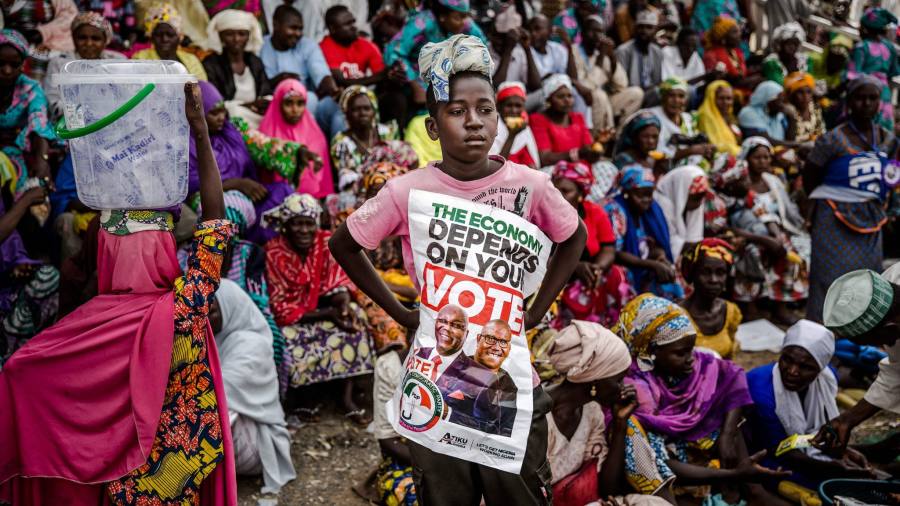 Nigeria’s two main presidential candidates urged the public to vote in a pivotal election on Saturday as they tried to avert a slump in turnout after a week-long delay to the poll.

The postponement of the national and parliamentary polls, likely to be the biggest election in African history, sparked outrage across Nigeria, deepening disillusionment with the political system and making it harder for some to vote.

The government declared a national holiday on Friday in an effort to accommodate roughly 73m eligible voters, many of whom will have to travel back to their polling places after the postponement announced last Saturday just hours before voting was set to begin.

Millions of Nigerians go to their hometowns to vote at great personal expense. In order to alleviate the financial strain, both main parties have offered free buses to registered voters, while one national airline offered discounted flights for those with voter cards.

In a public address on Friday morning, President Muhammadu Buhari praised Nigerians for their “patience and peaceful conduct so far during this electoral season and especially during this intervening week following the postponement”.

The Independent Nigerian Electoral Commission has offered sceptical Nigerians repeated assurances that Saturday’s election will take place. “We have no reason to believe that anything, except an act of God” could spark a further postponement, Inec chairman Mahmood Yakubu said at a press conference on Thursday.

In the week since Inec announced the delay, Mr Buhari’s All Progressives Congress and the main opposition People’s Democratic party candidate, former vice-president Atiku Abubakar, have traded accusations of vote-rigging.

The PDP has warned supporters to ensure their vote was not stolen and slammed the president for saying earlier this week that he had directed the security services to be “ruthless” when dealing with those seeking to disrupt or rig the election, who would do so “at the expense of their own life”.

There is little reliable polling in Nigeria but analysts and the parties themselves believe the race is close.

Mr Buhari is vulnerable on the main issues he campaigned on in the 2015 election. The national security picture remains fraught, with violence roiling many parts of the country. The economy is still sluggish, with unemployment soaring from 8.3 per cent to 23.1 per cent on his watch. And while Mr Buhari is still widely viewed as clean, close associates have been accused of graft and his signature anti-corruption drive has been criticised as partisan.

Mr Abubakar, a wealthy businessman, has a strong national profile, but has been dogged by allegations of corruption and crony capitalism, which he denies. He has promised to privatise some state assets and has pitched himself as the pro-business candidate who can revive Africa’s largest economy after what he argues is the failure of Mr Buhari’s largely state-driven approach.

The president has portrayed himself as the candidate for ordinary Nigerians, accentuating his administration’s reputation for hostility towards the private sector.

Some analysts question how Mr Abubakar’s pro-business pitch will play in a country with the world’s highest number of people living in extreme poverty — 87m of its roughly 190m citizens live on less than $1.90 a day.

“I personally think the APC strategy is more effective, because it’s a country where about 60 per cent are living under the poverty line,” said Amaka Anku, Africa director for the Eurasia Group. “It’s a poor country.”

Mr Buhari’s election in 2015 was the first time an opposition candidate claimed victory since democracy returned to Nigeria in 1999. If Mr Abubakar wins, it will return power to the party that ran Nigeria until 2015.

Results are expected to be announced on Tuesday, but could come as early as Monday.