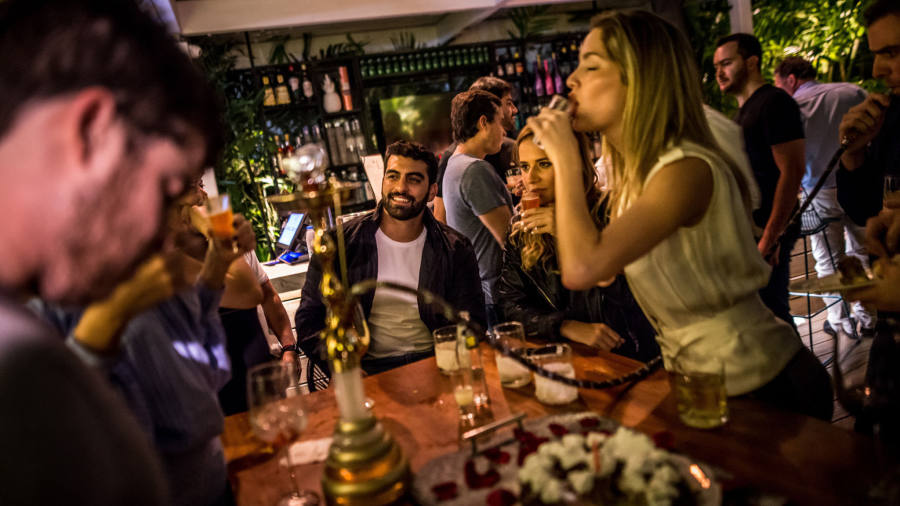 While thousands of volunteers plan to spend this weekend distributing food to those hit hardest by Venezuela’s humanitarian crisis, a lucky few in Caracas will be tucking into steak with butter sauce, asparagus and roast potatoes, topped with parmesan cheese, parsley and truffle oil.

That’s one of the signature dishes at La Esquina, one of a handful of restaurants that still function and indeed thrive in a tiny bubble of opulence in the Venezuelan capital.

Elsewhere in the country, people are suffering hunger and malnutrition, victims of the biggest economic collapse in modern Latin American history. Just metres from the restaurant, they rummage through refuse skips looking for food.

But La Esquina’s leafy terrace is packed. Well-heeled Venezuelans in designer clothes sip vodka tonics and nibble on crayfish tempura and grilled octopus. A soft light glimmers off the ornamental pool. Outside, the street is lined with SUVs, their tinted windows shut tight. Drivers and bodyguards stand by, waiting for their employers to emerge. The steak costs 35,500 bolívares ($11). Throw in a bottle of 2011 Pascal Chatonnet Bordeaux and the bill jumps to $87 — 15 times the monthly minimum wage.

“What can I say? I’m not going to tell you I’m a typical Venezuelan or that we all live like this,” says 27-year-old Mauricio Barragán as he orders at the bar. “I’m lucky. I have money.”

La Esquina is not alone. Up the road, Lola attracts a younger crowd. Both restaurants look like they’ve been plucked from Miami’s South Beach. During the day, well-dressed shoppers flock to the Fresh Fish delicatessen to buy the kind of food most Venezuelans can only dream of. The shelves are packed with German caviar, French champagne and Spanish olive oil. A bijou 300g bag of Carnaroli rice imported from Italy, costs 16,300 bolívars ($5).

“We know we’re the fortunate few,” says Edwin Figueroa, a 37-year-old financial consultant as he unloads his groceries at the checkout. “No one in this place can seriously claim to be affected by the hardship that most Venezuelans are suffering.”

Who are this wealthy elite? How do they make their money? “Some are from old money,” one diplomatic source says. “They made their wealth years ago and invested it wisely — in Miami and elsewhere. They don’t necessarily spend a lot of time in Caracas these days but when they do, they live very well indeed.”

Others are from the new rich, the so-called “boligarchs” who have benefited from their ties to President Nicolás Maduro’s Bolivarian socialist regime and got rich by playing the exchange rate system, which for years allowed them to buy dollars at a vastly discounted rate and sell them at a profit on the black market. Still others are said to have grown rich through good old-fashioned corruption.

On a recent afternoon, I found Raúl Gorrín, the millionaire owner of TV channel Globovisión, relaxing with business associates on the terrace of La Esquina. Days earlier, the US Treasury had sanctioned him, accusing him and his partners of paying hundreds of millions of dollars in bribes to Venezuelan officials and conspiring to launder more than $1bn through Florida and New York.

But in Caracas, the US authorities cannot touch Mr Gorrín. He declined to comment on his case but it didn’t seem to trouble him. Despite 20 years of a so-called socialist revolution, the gap between Venezuela’s “haves” and “have nots” seems as wide as ever, if not wider. Not only has the revolution failed by the standards of western capitalism (it has not made people richer) but on its own terms (it has not created a more equal society).

For now, the wine still flows. There are few signs that the sanctions the US imposed on the oil industry last month are biting. When they do, they could play into Mr Maduro’s hands.

“Within a month or two . . . only government vehicles will have gas and only government officials will be eating well,” wrote David Smilde, at Tulane University in the US, in a recent op-ed. “[This will] allow Maduro to ratchet down his authoritarian project.”